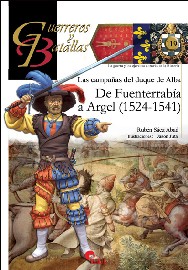 Few figures in the history of Spain have aroused as much controversy as Fernando Alvarez de Toledo and Pimentel, Duque de Alba. Admired by some and feared by others, he pushed the Spanish empire to achieve its greatest military successes and continental supremacy.

During Fernando's military career he held important positions representing the Spanish Crown throughout the continent. The various political events that took place led one after another to the most committed destinations where Spain struggled to achieve the desired hegemony.