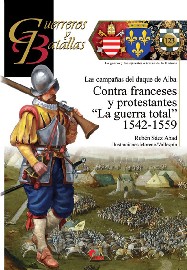 The 1542 appointment of Fernando Alvarez de Toledo, third Duke of Alba, as Captain General of Spain made him the main military authority of the peninsula. His successful defense of the Perpignan Square would oblige the French monarch to desist from continuing his war effort in the Pyrenean front.

Alba became chief Imperial Commander in time for Germany's 1546-1547 campaign, when he showed tactical superiority over his opponents despite having inferior material and human means. In the Battle of Muhlberg, he played a pre-eminent role, although his triumph would be of little use. After the revolt of 1552, he suffered a period of failures, including in front of the walls of Metz. He recovered during the Italian campaign of 1555-1557, where he managed to defeat the Franco-Papal armies and subdue the Levantisco Pope Paul IV.