THE CAMPAIGNS OF THE DUKE OF ALBA IN PORTUGAL 1580 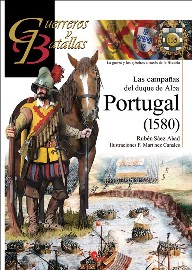 This last book of the Warriors and Battles series covers the military campaigns of the Duke of Alba and the conquest and annexation of Portugal (1580) under the reign of Philip II. The death of the Portuguese king Sebastian I in the tragic battle of Alcazarquivir (1578) without having left an heir to the throne opened a deep succession crisis in the neighboring kingdom. Soon a struggle opened for the crown, mainly between Philip II and Antonio, prior of Crato.

The impossibility of reaching an agreement that would facilitate Philip II's access to the throne peacefully forced him to launch his armies into Portugal. The Duke of Alba was chosen to lead the invasion army. The Duke achieved one last victory for Philip II, dying in Lisbon without receiving royal authorization to return home.