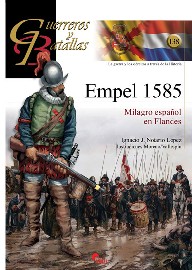 The Miracle of Empel was an unexpected Spanish victory on 8 December 1585 near Empel, in the Netherlands, as part of the Eighty Years' War, in which a surrounded Spanish force miraculously won against an enemy who exceeded them in number. B/w and color illust.

After the campaign of 1585, the Governor of Spanish Netherlands and commander of the Spanish troops Alexander Farnese, Duke of Parma decided to go into winter quarters on Northern Dutch territory. The troops of Karl von Mansfeld occupied the area around Hertogenbosch. Some 3000-4000 men of the Spanish Tercio, including Juan del ?guila, under Maestre de Campo Francisco Arias de Bobadilla were stationed on Bommelerwaard, which was supposed to be rich enough to support these troops through the winter. But all farmers had left the island, taking their livestock with them.

To make the situation of the hungry Spanish troops even worse, Dutch commander Philip of Hohenlohe-Neuenstein arrived with a strong land force and 100 ships. Philip of Hohenlohe-Neuenstein breached the dikes of Bommelwaard, forcing the Spanish back over the Rhine to Empel. There they were unable to reach Hertogenbosch, because the terrain was flooded and guarded by the fleet of Hohenlohe. The island was attacked as well by artillery fire coming from a fort, at the other side of the river.

That night, a sudden further drop in temperature started to freeze the shallow waters of the flooded lands. This made possible for the Spanish troops to attack the rebels and burn their ships. Admiral Hohenlohe-Neuenstein supposedly responded by saying: 'It seems that God is Spanish to work such a miracle for them'.