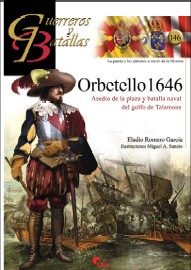 The Battle of Orbetello, also known as the Battle of Isola del Giglio, was a major naval engagement of the Franco-Spanish War of 1635. It was fought on 14 June 1646 off the Spanish-ruled town of Orbetello, on the coast of Tuscany, Italy, between a French fleet led by Admiral Armand de Maille, Marquis of Breze, and a Spanish fleet commanded by Miguel de Noronha, 4th Count of Linhares sent to break the blockade of Orbetello and relieve the town, besieged since 12 May by a French army under the command of Prince Thomas of Savoy. The Battle of Orbetello was tactically very unusual, since it was fought by sailing ships towed by galleys in a light breeze.

After a hard but inconclusive fight during which Admiral Breze was killed, the French fleet withdrew to Toulon leaving the sea to the Spanish, who decided not to pursue them to relieve Orbetello. The land forces disembarked by Count of Linhares a few days later, however, failed to dislodge the French lines, and the siege could be undertaken until 24 July, when another Spanish army led by the Marquis of Torrecuso and the Duke of Arcos, which had come from the Kingdom of Naples across the Papal States, defeated the besieging French troops, forcing them to retreat with heavy losses.