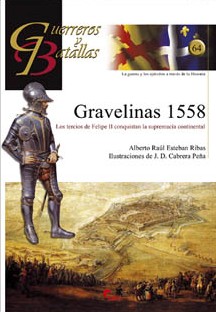 The Battle of Gravelines was fought on July 13, 1558 at Gravelines, near Calais, France. It occurred during the 1547-1559 war between France and Spain.

The battle resulted in a victory by the Spanish forces, led by Lamoral, Count of Egmont over the French under Marshal Paul de Thermes. The Spanish were supported by the English Navy, who opened fire on the French as they reached the sand dunes at Gravelines. Color plates