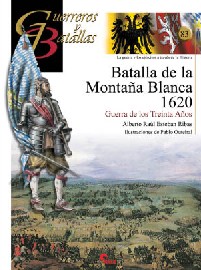 On November 8, a small Catholic force was sent to probe the Protestant flank. To their surprise, the Bohemians retreated at their advance. Tilly quickly sent in reinforcements, and the Bohemian flank began to crumble. Anhalt tried to retrieve the situation by sending forward infantry and cavalry led by his son, Christian II.

The cavalry charged into the Imperial infantry, causing significant casualties, but Tilly countered with his own cavalry, forcing the Bohemian horsemen to retire. The Bohemian infantry, who were only now approaching the Imperial army, saw the cavalry retreating, at which they fired one volley at extreme range before retreating themselves. A small group of Imperial cavalry began circling the Protestant forces, driving them to the middle of the battlefield. With the Bohemian army already demoralized, company after company began retreating, most without having actually entered the battle. Tilly and his Imperial cavalrymen advanced with 2,000 Bavarian hussars, steadily pushing Protestant forces back to the Star Palace (just west of Prague), where the rebels tried without success to establish a line of defense.

The Battle of White Mountain was more a skirmish than a full-fledged battle. The Bohemian army was no match for Emperor Ferdinand's troops. The actual battle lasted only an hour and left the Bohemian army in tatters. Some 4,000 Protestants were killed or captured, while Catholic losses amounted to roughly 700.