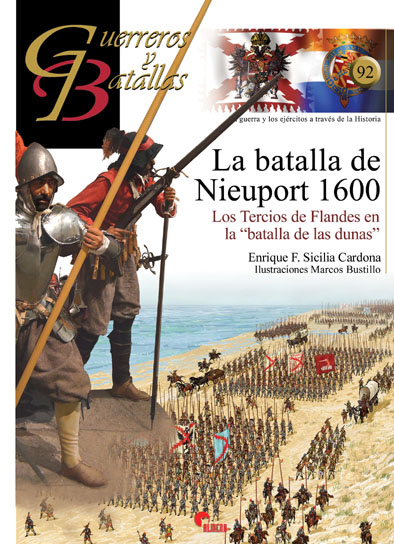 The Battle of Nieuwpoort between a Dutch army under Maurice of Nassau and Francis Vere and a Spanish army under Albert of Austria, took place on 2 July 1600 near the present-day Belgian city Nieuwpoort

Against Maurice's complaints, the States General under Johan van Oldenbarneveldt had ordered Maurice to take the army, march south along the coast and take the pirate nest of Dunkirk. The divergence of opinion on this matter between Maurice and Van Oldenbarneveldt were the first signs that the two de facto leaders of the Dutch Republic were beginning to drift apart. This rivalry would eventually lead to the arrest and execution of Van Oldenbarneveldt in 1619.

It was thought that the vicious and long-continued mutiny of a great part of the Spanish troops would make it impossible for the Archduke to collect an army for the relief of Nieuwpoort.

By 21 June Maurice had collected an army for the operation of 12 infantry regiments and 25 cavalry cornets: some 12,000 Foot and 2,000 Horse. On the 22nd, he crossed the Scheldt Estuary in a multitude of small vessels and moved to Ostend; his base of operations. He left there half a regiment and four cornets to reinforce the garrison and on the 30th started for Nieuwpoort.

When Maurice arrived in front of the place on 1 July, he sent 2/3 of his force across the Yser River to blockade it from the West. That night, while he was making preparations for a regular siege, he received news that the Archduke was close at hand with a field army. He knew he was cut off from his base; so he ordered his cousin Ernst Casimir (Ernst Casimir I of Nassau-Dietz) with a force to delay the advancing Spanish while he was bringing the best part of the army to cross again the Yser and rejoin the rest of the army to face the Archduke. He had no option left but to present battle or risk a potentially disastrous retreat by sea.

Ernst Casimir was ordered to seize the Leffinghen bridge, he commanded the Edmonds regiment (Scottish) and the Van der Noot regiment (Dutch) together with four cornets of cavalry and 2 guns, but when he arrived he found that the enemy was already in possession of it. Ernst deployed his force behind a ditch, hoping to fight a delaying action, but the Spaniards were already in great strength across the bridge and charged right home, piercing his centre. The infantry was routed at once and the cavalry fled in panic: the Scots were killed almost to a man and the Dutch fared only slightly better, taking refuge in Ostend. For all purposes, Ernst's command had ceased to exist.

After that cheap victory, the Archduke held a conference with his captains. Most urged to entrench the army across the road to Ostend, forcing Maurice to attack along a narrow front where the Dutch cavalry, mostly heavy, would not be effective against the lighter Spanish cavalry. However, the mutineers, who had been rallied by the Archduke on the promise of free plunder, were eager for a fight and out-argued the rest. The army therefore advanced in battle order along the coast. It was mid-day and the tide was coming in; so that in the end they were forced to abandon the shrinking beach and climb slowly up the slippery sand dunes.

Maurice had just enough time to assemble his whole army to face the Archduke.