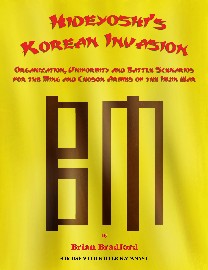 This book deals with the Imjin War, fought between the invading Japanese and the Ming and Choson Dynasties. Within the 90+ pages is Army organization and game rules for the Ming and Choson Armies under KK2, game ratings for over 120 Ming and Choson leaders, supplemental siege rules that introduce the use of siege engines, and seven scenarios: Chungju, Imjin River, 2nd Pyong-yang, Pyokje, Haengju, Chiksan, and Sachon. The book also includes Imjin War playing charts for KK2.

A major part of the book deals with modeling the armies of the period and contains seven black and white plates illustrating the appearance of the Ming and Choson Armies, along with their flags.

Nearly 10 years of research has gone into creating this book and much of the information inside it is being presented in English for the first time. While intended for use with Killer Katanas 2, the book is by no means limited to these rules, and the information inside can be used for many other rule sets. This book is also valuable to any painter or modeler who is looking for uniform and flag information on the Ming and Choson Armies of the war.