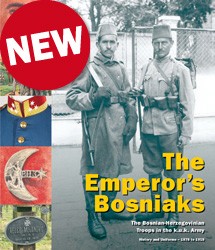 The Bosniaks, who were seen as an elite group within the k.u.k. Army and who - with their strange uniform and fez headgear - attracted much attention from the various formations of the Austro-Hungarian Army, are the focus of the book. This richly-illustrated volume also offers a detailed view of the uniforms, equipment, and weaponry of the Bosniaks, from the formation of the Bosnian-Herzegovinian infantry and Jager troops to their first deployment in WWI. Also includes short bios.

This book is produced in co-operation with the Heeresgeschichtliches Museum Vienna, the Austrian Federal Armed Forces, the Army Museum Budapest, and private collectors.