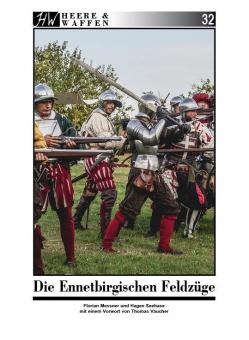 The Ennetbirgische Campaigns depicts the campaigns of the Swiss and Valais against Milan, as well as the conflicts between the Graubundner and the Duchy of Milan, with the conquests of the Confederates over the Alpine passes to the south. The luck of the war was changeable, with great victories like the one at Giornico and catastrophic defeats like that of Arbedo. The crossing of the main ridge of the Alps presented the late medieval armies with enormous challenges. For a short time, the Confederation rose to the rank of a major European power. The struggles of the Confederates in northern Italy for and against the French crown are described as well as the founding phase of the papal Swiss Guard.

Also deals with the internal conflicts of the Swiss in connection with the Ennetbirgische Campaigns. The armies of the Confederates and their opponents are portrayed in detail in terms of composition, armament, tactics, and use. Includes contemporary illustrations, maps, and images of international re-enactment groups.