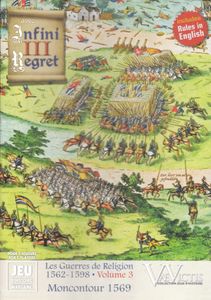 The Peace of Longjumeau, signed on 23 March 1568, ended the second Wars of Religion but was fragile. The royal power no longer trusted the prince of Conde, leader of the Protestant party. A few months after the signing, the Catholics attempted to capture the prince of Conde and Admiral Coligny by surprise. The plot failed and the Protestant commanders reassembled with their armies and took refuge at La Rochelle. Thus began the campaign constituting the third War of Religion at the end of the summer of 1568.

On 3 October 1569, the two armies faced off near Moncontour. De Coligny did not want to engage in battle, knowing he was outnumbered. However, German mercenaries among his troops were unhappy at not being paid and precipitated the movement. The Catholic troops were better prepared, greater in number, and more heavily armed and easily pushed back the assault of the Protestants who were forced into a disorderly retreat. Although it barely lasted two hours, this battle resulted in between 6000 and 10.000 men dead or taken prisoner on the side of the Protestants compared to 1000 for the Catholics. The Swiss soldiers of the Royal Army spared no lansquenet in retaliation for La Roche-L'Abeille.