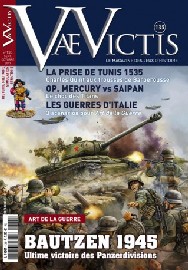 In mid-April 1945 the 2nd Polish Army, left wing of the 1st Ukraine Front, broke the German lines and occupied Bautzen. Then, the Polish commander, Karol Swierczewski, a veteran of the Spanish Civil War, decided to keep advancing further south, with the capital of Saxony, Dresden, as their objective. Judging the Germans defeated, the Southern flank was left relatively unguarded. Army Group Centre, however, still had some fight left launching a last offensive against the flank of the Polish-Soviet forces, in the hope of helping Berlin-it was truly the last panzer offensive of the war.
Although the counteroffensive failed to stop the Soviet advance or relieve Berlin, the Germans inflicted a sound tactical defeat to the 2nd Polish Army (more than 20,000 casualties), recovering Bautzen and holding it until the end of the war. Bautzen 1945 is a simulation of that momentous offensive, using an evolution of the Ebre 38 system published in Vae Victis 61 with daily turns.