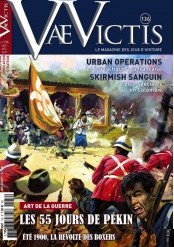 Game: Summer of the Boxes

Recreates the siege of the Legations, the great colonial power at the end of the 19th century, in Beijing in the summer of 1900 during the Boxer Rebellion. In this one-player game, the player controls the soldiers who defended the legations against the hordes of Boxers, controlled by an original system that manages their actions and combats. The player's goal is to hold on until the arrival of the rescue column, sent by land to lift the siege.

The map represents the Legation Quarter on a scale of 15cm for 500 meters. A turn represents one day and the same day can be divided into several combat phases that represent the Boxers' assaults. There is no turn counter and a deck of 54 cards must be used; each card drawn represents a day. Nine of the cards are combat cards. Once the phase system has been assimilated, it is simple to use. Plan on 3-4 hours for game play.