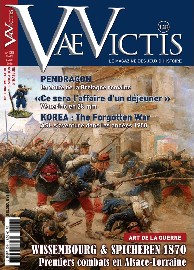 History and Wargame inside: Wissembourg and Spicheren 1870. On 19 July 1870, the French Empire declared war on the kingdom of Prussia. Opposing three corps (one Bavarian and two Prussian), Douay's division held the town and the heights of Geisberg until early afternoon before yielding to the mass. In Spicheren, on 6 August, the 2nd French corps had a good position and blocked the Prussian troops into the night at the risk of being outflanked. Their retreat was ill-prepared and caused the rest of the Lorraine army to retreat to the walls of Metz. Game turn: one hour; Counters: brigades and regiments; Map: One hex = 500-700 meters; Complexity: 5/10
Possibility of playing solo: 7/10; Game duration: 1.5 hours - 3 hours depending on the scenario.