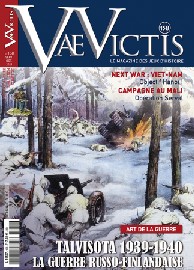 In 1939, faced with Nazi Germany's expansionist politics, Stalin demands of Finland some strategic territories necessary for the defense of Leningrad. Helsinki refuses and on 30 November, with no prior declaration of war, the Red Army attacks the Finnish territory with five armies and 28 divisions. The strength ratio is crushingly in the Soviets' favour with 400,000 troops, 1500 tanks and a modern aviation against 265,000 Finnish soldiers and 20 tanks.

To everyone's surprise, the overwhelming numerical and materiel superiority of the Russians is broken by the fierce resistance and the bravery of the Finnish forces. Despite a front extending from the Arctic to the isthmus of Karelia, and the offensives of mostly 3 against 1, the lack of preparation and coordination of Stalin's forces, the extreme climactic conditions and the Finnish belligerence jostle all predictions and overturn military logic. With Mannerheim's troops employing Molotov cocktails, surprise infiltrations, and an optimal exploitation of the terrain to resist the Russian giant until March. But the lack of armament and international support, the limited numbers of troops, and a Soviet surge irreversibly compel the little Nordic outlier to sign an accord on 12 March 1940.

Based on a system favouring the fog of war and the uncertainties of military preparations, Talvisota places both players in a situation requiring them to choose their strategies after careful reflection. Maintaining one's war morale is important, but the decisive results are mainly achieved by considering the potential actions of the other side.

In the solo play mode, the player controls Finland's destiny against the Soviet steamroller with the same intensity of play.