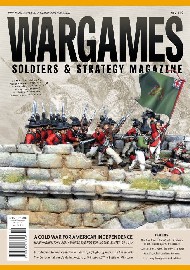 Other Features:
The Battle of Ascalon 1099: A Reckless Charge to Win the Day
The Battle of the Milvian Bridge AD 312: Bearing the Cross
The Battle of Bir Hakeim: 26 May to 11 June 1942: The Old Man's Well
Must-Have Terrain for any Wargamer: Terrain 101
Baron von Geismar's Cavalry Corps in France (Part 1): Constantly in Arms and Mounted
How to Paint Armed Civilians in World War II: The Polish Home Army
Building Scenery for the Radfan Uprising: The Aden District Prison