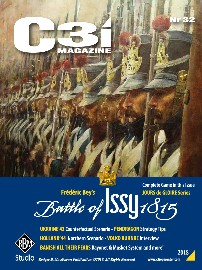 The Battle of Issy was fought on 2 and 3 July 1815 in and around the village of Issy, a short distance southwest of Paris. The result was a victory for the Prussian General von Zieten over a French army commanded by General Dominique Vandamme. Issy 1815 is the 44th battle in the Jours De Gloire series.

Gettysburg is a simple wargame focused on the epic Civil War battle of Gettysburg (July 1-3, 1863). The game is played in half-day turns (6 turns total) in which time Lee's Confederates attempt to open the road to Baltimore/Washington or destroy Meade's army. This is the first volume in the C3i Series.