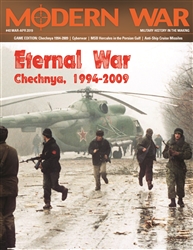 Chechen War is an operational-strategic level two-player simulation of the 1st Chechnya War (1994-1996) wherein the Russian Federation under Boris Yeltsin attempted to directly and forcibly put an end to the Chechen independence movement.

The Russian player must deal with low morale at the front and at home to win the war to keep Chechnya within the Russian Federation. The Chechen player is outgunned and outnumbered, but can wage an effective guerilla campaign to bog down the entire Russian effort and thereby achieve independence. There is a total of nine game turns covering two years of conflict, from December 1994 to December 1996.