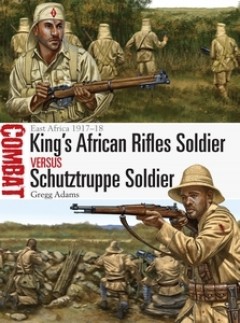 Specially commissioned artwork and thrilling combat accounts transport the reader to the far-flung and inhospitable East African theater of World War I, where the Schutztruppe faced off against the King's African Rifles. In an attempt to divert Allied forces from the Western Front, a small German colonial force under the command of Oberst Paul von Lettow-Vorbeck raided British and Portuguese territory.

Despite being heavily outnumbered, his expert use of guerrilla tactics forced the British to mount a series of offensives, culminating in a major battle at Nyangao-Mahiwa that saw both sides suffer heavy casualties.

Meticulously researched analysis highlights the tactical and technological innovation shown by both armies as they were forced to fight in a treacherous climate where local diseases could prove just as deadly as the opposition.