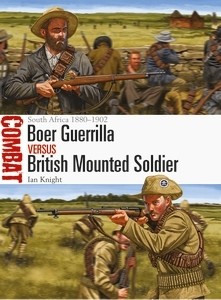 Waged across an inhospitable terrain which varied from open African savannah to broken mountain country and arid semi-desert, the Anglo-Boer wars of 1880-81 and 1899-1902 pitted the British Army and its allies against the Boers' commandos.

The nature of warfare across these campaigns was shaped by the realities of the terrain and by Boer fighting techniques. Independent and individualistic, the Boers were not professional soldiers but a civilian militia who were bound by the terms of the 'Commando system' to come together to protect their community against an outside threat. By contrast the British Army was a full-time professional body with an established military ethos, but its over-dependence on conventional infantry tactics led to a string of Boer victories.

This fully-illustrated study examines the evolving nature of Boer military techniques, and contrasts them with the British experience, charting the development of effective British mounted tactics from the first faltering steps of 1881 through to the final successes of 1902.