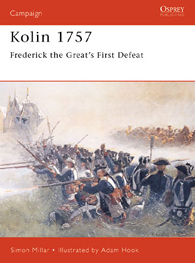 In May of 1757 Frederick the Great invaded Bohemia, smashed an Austrian army outside Prague and bottled it up in the city. The Empress Maria Theresa dispatched Marshal Daun with 60,000 men to save the Empire's second city. Frederick had won a string of victories over the Austrians and was convinced his men would always triumph.

Although outnumbered he attacked, but the Austrians were waiting. His army was defeated and forced to withdraw. As his veterans commented, 'they were not the same old Austrians at all'. Simon Millar shows how Frederick's overconfidence proved his undoing at Kolin.