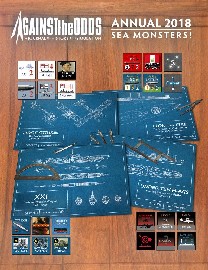 Iron and Fire is a moderate level complexity game covering the battles fought by the Peruvian Ironclad Huascar during the 1879 War of the Pacific against Chile. It basically outclassed everything it met and gobbled them up...until Chile concentrated their ships. Multiple scenarios.

First Strike is a solo game that looks at the first strike by carrier aircraft in military history, the British air raid on Christmas Day, 1914, against Cuxhaven. Using seaplane tenders and seaplanes, the goal was to not just strike at the Zeppelin sheds, but also hopefully lure out, engage, and destroy any elements of the Imperial German Navy that came out to strike back at the raiders. Includes air strike and sea battles involving Zepplins, U-boats, and capital ships.

Under Ten Flags starts early in 1939 when the German merchant raider Atlantis made its way into the South Atlantic to sink and capture Allied cargo vessels. Its crew used their skill in disguising the appearance of the vessel to aid its encounters or avoid enemy warships. The journey of the raider Atlantis lasted for almost two years, traveling over 100,000 miles in 602 days.

XXI is a solitaire game set in 1943 that challenges the player (acting as both Armaments Minister Speer and Grand Adm Donitz) to organize and complete construction of a fleet (or at least 'enough') of the new German Type XXI submarine -- then unleash the wonder weapon on the Allied convoys. However, this new sub is far larger, more complex, expensive, and resource and manpower intensive than previous submarines. Just a few of these new Type XXIs will do nothing. Only a radical transformation in shipbuilding techniques to mass produce the design - backed by the ruthless will to succeed - will enable this 'wonder weapon' to arrive in time...