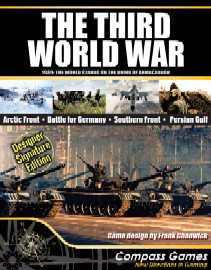 Classic Reborn! revised edition of wargame The Third World War features many new enhancements, including larger counters. All four games in the series are included:
Third World War (Battle for Germany): Struggle for central Europe between NATO and the Warsaw Pact.
Southern Front: Race for the Turkish Straits: Bulgaria and Romania, reinforced with three Soviet armies and special-capability forces, face off against Greece, Turkey, and Yugoslavia, thinly reinforced with a few elite units from the US, France, and Italy.
Arctic Front: Battle for Norway: Soviet forces of the Leningrad Front, with special airborne, amphibious, and arctic-equipped contingents, assault Norway, reinforced with a few elite units from the US, Britain, Canada, and other NATO nations.
Persian Gulf: Battle for the Middle East: Includes a special game within a game, covering the diplomatic, political, and military maneuvers by the USSR and US in the Middle East before - and leading to - the general outbreak of the Third World War.

All four separate games combined into one, comprehensive package with all-new rules treatment backed by many illustrations, an index, and clarifications and examples of play.

Information:
Complexity: 6 out of 10
Solitaire Suitability: 8 out of 10 (no hidden units)
Time Scale: 1 week per turn
Map Scale: 45 km per hex
Unit Scale: divisions, with some brigades and regiments, 100 aircraft per air unit
Players: one to two per individual game, one to eight for combined campaign
Playing Time: 6-10 hours per game, 36+ hours for full combined campaign