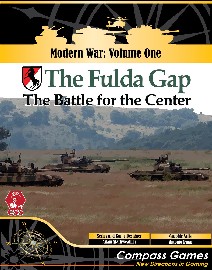 Stopping the possibility of a Soviet advance against NATO required some of the highest skilled troops to defend far forward in West Germany to prevent the vital industry and population from falling into Soviet hands. This was the task of the 11th Cavalry Regiment - the famed Black Horse Regiment - in the area well known as the Fulda Gap. The Fulda Gap was a break in the defensively favorable terrain that channelled advance directly towards the main American bases in West Germany. It was vital that this be held as long as possible.

This is the first game in the Central Front series of games using the Company Scale System (CSS) system. It will feature nuclear weapons, chemical weapons, helicopter support, air support, electronic warfare, and many other aspects of modern warfare. Future games in the series will include the Hof Gap defense, the German Northern Plains defense and the last stand at Berlin.

Five scenarios are included in the game.
Exercise Summer Rain. This is a intro game in the guise of a NATO exercise. One map only. The 11th Cavalry defends against a Soviet Division trying to exit the map. Plenty of play here but you'll get a stripped down version of the game - no air, nukes, etc.

The Thin Black Line. This is a 4 mapper but only one day long. This is the balloon going up and the 11th Cavalry is once again desperately defending while V Corps is rushing up to the line.

The Stampede of the Third Herd. This is a 2 mapper also covering one day but takes place on day 6 of the war. The 3rd Armored Division is counterattacking on the Soviet right and must defeat the 79th Guards Tank Division quickly to force the Soviets to retreat.

Hold the Line at All Costs! The first of two campaign games. Here is the likely historical scenario. 4 mappers, 5 days...the 11th Cavalry must hold as the V Corps comes on the map....they too must hold a forward defense as more and more Soviet force comes on the map to force their way through.

Wetzel's Backhand Blow. This is the other campaign game. This assumes that NATO lets the Soviets come head long forward through the map area and are held to the southwest at Frankfurt. Over the next four days, the NATO line stiffens and on Day 4 of the war, the V Corps counterattacks with everything they have deep into the Soviet rear. Another 4 mapper covering 4 days. The Soviets will slowly retreat but all will depend on NATO taking the vital ground in the area and surrounding the Soviet spearhead to win the war.