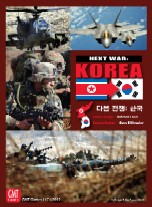 In Next War: Korea, the Korean Peninsula is on fire with two of the world's most well-prepared, antagonistic forces arrayed against each other. Can you, as the North Korean People's Army commander, conquer the South in 3 weeks before the full might of the US can be brought to bear? Can you, as the Republic of Korea's Army commander, hold out against the renewed Communist assault until help arrives? And what will China do?

Next War: Korea, the first of a planned series of Next War games, allows players to fight a near future war on the Korean peninsula. In this updated and improved version of the previously-released Crisis: Korea 1995, players have access to virtually all military assets of North and South Korea, as well as large forces from the USA and the PRC. The integrated, easy to learn air-land combat system allows for unit efficiency, armor effects, light infantry, attack helicopters, Close Air Support, Cruise Missiles, and the particularly tough terrain of Korea.