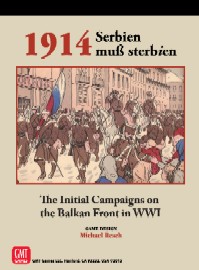 1914, Serbien Muss Sterbien (an Austro-Hungarian jingle that translates to 'Serbia must die') is a wargame covering the initial campaigns on the Balkan Front in WWI. The map encompasses the primary theater of war from Peterwardein in the north, Sarajevo in the west, to Nis in the south-east.

The game system used is the same as found in 1914, Offensive a Outrance and includes three scenarios: two short and a Grand Campaign scenario that covers the period from the initial Austro-Hungarian invasion in August to exhaustion a stalemate in December.

Game Scale
Combat units are primarily Divisions and Brigades. Each hex is approximately 8 kilometers across. Each game turn represents from two to four days of time depending on the season.