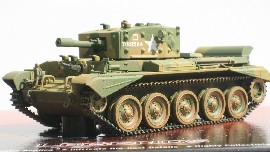 Cromwell tank was used by the British Army during the later stages of World War II. The Cromwell was ordered in 1941 and intended to replace the lightweight Crusader 'cruiser' tank by being more heavily armored, and, it was hoped, more survivable in battle. Its greater weight was to be driven by a 600-horsepower Rolls Royce Meteor engine, a derivative of Rolls Royce's line of aircraft engines. Initial models, however, were powered by other engines and were designated Cavaliers and Centaurs when they entered service in mid-1942. The first genuine Cromwells with Meteor engines entered service in early 1943.

The Cromwell tank weighed about 27 tons and had a top speed of 38 miles per hour and a range of between 80 and 170 miles, depending on the terrain. It was initially armed with a 75mm gun and two 7.92mm machine guns. The Cromwell's main assets were its speed, maneuverability, and ease of repair. It first entered battle in large numbers in mid-1944, during the Normandy Invasion and the ensuing campaign across northern France. From Normandy on, Cromwells and American Sherman tanks formed the backbone of British armored divisions. Like the Shermans, however, most Cromwells were outgunned by the more powerful German Panther and Tiger tanks. Cromwell tanks served in British armies until the war ended in Europe in mid-1945.