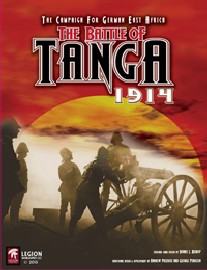 Often referred to as 'The Battle of the Bees,' the Battle of Tanga, an amphibious attack launched by British and Indian forces, established the burgeoning reputation of Colonel (later General) Paul von Lettow-Vorbeck as he successfully defeated the British-led attempt to capture German East Africa. Some 80km from the border of British East Africa, Tanga was sited on a high plateau in German East Africa, and was its busiest sea port as well as being the site of the crucial Usambara railway. Already the subject of gunboat diplomacy by a British warship on 17 August, Tanga had been spared from bombardment by an agreement extracted from the town's population to refrain from initiating local aggression.

However, the British subsequently changed their minds and ordered General Aitken to capture the German colony via a landing at Tanga in November 1914; it was to be the first major action of the war in German East Africa. Something of a fiasco from the start, Aitken's force of 8,000 insufficiently trained Indian reserves (from Indian Expeditionary Force 'B') were preceded by the inopportune arrival, on 2 November, of a British cruiser announcing the termination of the August agreement.