HELL OVER KOREA: An Expansion Module for B-29 Superfortress 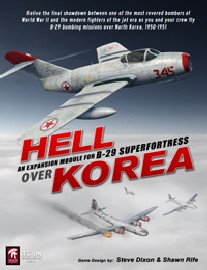 However, in November 1950 the Chinese Communists were in the war, and the B-29 began facing its first serious opposition with the introduction of large numbers of Soviet MiG-15 fighters. It was now a real contest. However, the MiG-15 had been specifically designed to shoot down B-29s and the aging Superfortresses were outmatched by the jet, even with fighter escorts. Aircraft losses would soon restrict most B-29 missions to night-only attacks, largely in a supply-interdiction role.