THE LAST SUCCESS: Quadrigame of the War Against Austria April - July 1809 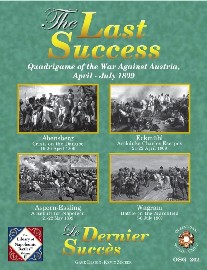 These four games explore the major battles of 1809, where the French Army encountered a modernized Austrian Army under the capable Archduke Charles. Each game shows the approach to the battlefield on the day before battle. The Aspern-Essling and Wagram battlefields are on one map. Set at the scale of Napoleon's Last Battles-525 yards per hex and one hour turns-the game retains the Command System of Commanders and Corps Officers.