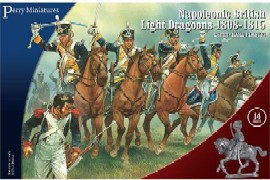 The bodies are split at the waist, with overalled legs as well as breeches/booted legs provided. These are very animated set of cavalry due to the split bodies, separate heads and arms. Heads with helmets tropical climates included. With a small addition of a queue (either painted or modeled), the figures in this box can be used back to 1800.

Box contains 14 mounted figures in the box (12 troopers, one officer, and one trumpeter). Full uniform guide and service records and unit bases.