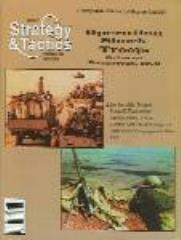 Operation Shock Troop: The Israeli Counterstroke Against Syria, 1973, is an operational level game depicting the Israeli offensive on the Golan Heights during the second half of the Yom Kippur War, 11 to 23 October 1973.

From the game rule booklet, 'The massive Syrian armored attack in the Golan Heights had finally been stopped, with tremendous equipment losses on both sides. The gallant but weary soldiers of the Israeli Defense Force (IDF) now prepared a daring invasion of Syria that could put them in artillery range of the enemy capital in a matter of days. Somehow, the IDF reformed the battered 7th Armored Brigade and the 21st Tank Division and sent them forward with the 20th Brigade's old Super Sherman tanks in support. Brilliant flanking maneuvers, a spirit of improvisation, and further reinforcements created a miniature blitzkrieg. Syrian troops and leaders alike panicked. The call went out for help from brother Arab nations. Only the timely arrival of the Iraqi 3rd Tank Division halted the advance of near Damascus. At that point, the United States put its forces on global nuclear alert to head off a Soviet para drop into Syria, and both superpowers proceeded to clamp down on their clients, ending the operation and with it the 'Yom Kippur War.''