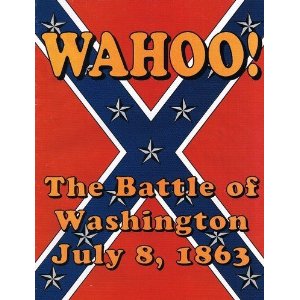 Alternate-history game covering the climactic 8 July 1863 Battle of Washington. One player takes the role of Robert E. Lee, commander of the Army of Northern Virginia, while the other player represents a combined Lincoln/Grant persona.

The game postulates that on the second day at the Battle of Gettysburg, the Confederate attack began earlier... Little Round Top was overrun and the bulk of the Army of the Potomac was forced to fall back on Baltimore to regroup.

The Confederate player is trying to conquer the City of Washington while (optimally) also destroying the Northerner's high command. The degree in which the Rebels succeed or fail is measured in victory points. This basically means, barring Lincoln's death, the Confederate player must gain control of the Capitol and the White House hexes to win.