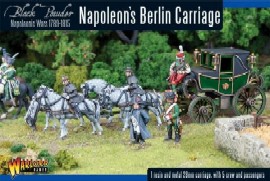 Named 'Berlin' after the then capital of Brandenburg, the 28mm kit includes Old Boney himself, his bodyguard as well as the four-horse coach. The carriage was built for Napoleon's Russian campaign but was captured by the Prussians at the Battle of Waterloo while the Emperor departed on horseback.

Use the model as a command piece, a battlefield objective or simply a cool terrain piece - its inspiring presence is bound it improve your dice rolls! And of course Napoleon makes the ultimate general for a French army.

Box contains a four-horse coach, Napoleon, and four attendants. This product is supplied unassembled and unpainted. Glue and paints not included.