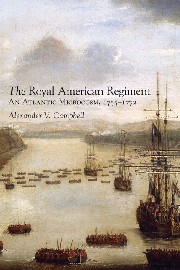 In 1755, the British army raised the 60th Royal American Regiment of Foot to fight the French and Indian War. Each of the regiment's four battalions saw action in pivotal battles throughout the conflict. And as Alexander Campbell shows, the inclusion of foreign mercenaries and immigrant colonists alongside British volunteers made the RAR a microcosm of the Atlantic world. Not just a potent, combat-ready force, it played a key role in trade, migration, Indian diplomacy, and settlement.

This book moves beyond the campaign orientation of most regimental histories to explore how the Royal Americans helped forge new Atlantic connections. Campbell draws on the regiment's rich archival legacy - including the private papers of its first three colonels-in-chief and of mercenary field officers - to describe more fully than previous accounts the lives these soldiers led in the context of their times.

Campbell takes a closer look at the motivations of regimental founder James Prevost, a Swiss mercenary in the courts of Kings George II and George III, and explores how migration to America attracted rank-and-file soldiers. He examines the unit's training, deployment, and operational conduct to reveal the use of new tactics, and also chronicles a year in the soldiers' lives as they attended to hard labor in preparation for the summer's campaigns. He also traces the postwar activities of these veterans, showing how many of them, by taking up land grants they had been promised upon enlistment, helped settle the frontier and expand commerce.

Rather than focus on previously documented animosity between British regulars and provincials, Campbell reveals how soldiers from different backgrounds formed a multiracial, multilingual society that reflected a truly cosmopolitan transatlantic identity.