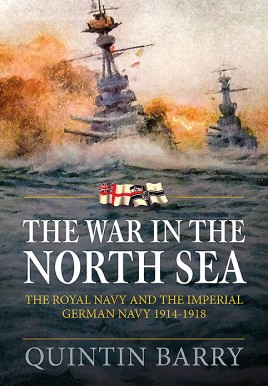 For years before the outbreak of the First World War, it was the expectation of most officers of the Royal Navy and the Imperial German Navy that very shortly thereafter, a decisive fleet action would be fought. This had a major impact on the strategic thinking on both sides of the North Sea. In fact, the unalterable geographic situation meant that for the Grand Fleet in its Scottish bases, the correct course to follow was not to seek a major fleet encounter. Essentially, it was by staying where it was that it could neutralize the High Seas Fleet and enforce an economic blockade of Germany.

The history of the war in the North Sea between 1914 and 1918 is a record of the attempts to break the deadlock - and it is also the history of the men who led the British and German navies. On both sides, the stresses of the huge burden which they bore led to a serious breakdown of trust in each other on the part of the admirals charged with the responsibility. Still more serious was the mutual loss of confidence between the admirals on the one hand and the politicians on the other; their letters and diaries reveal the bitter personal disputes that arose between them.

The principal naval battle of Jutland occurred when the British and German fleets clashed, almost by accident, in the North Sea on 31 May 1916. The outcome of the battle has prompted a minute examination of the tactics employed by the commanders, a continuous debate as to who won, and a bitter controversy between the supporters of Sir John Jellicoe (the commander-in-chief of the Grand Fleet) and Sir David Beatty (the commander of the battle cruisers).

Most British historians claim the battle as a British victory - a view which this book questions. It has been often suggested that after Jutland, the High Seas Fleet remained in harbor for the rest of the war, but as this book shows, the underrated Admiral Reinhard Scheer (its commander-in-chief) subsequently launched a number of major sorties. It was a series of chances that had determined the outcome of Jutland - and it was chance that repeatedly intervened to prevent a decisive encounter subsequently.

This book reviews the entire course of the war in the North Sea, from the first contacts between the fleets in the early days, to the ambitious (but abortive) mission planned at the end of the war for the High Seas Fleet - and, as a dramatic epilogue, its scuttling in Scapa Flow. Includes 150 B&W photos and maps.