GENERAL LEE'S IMMORTALS: The Battles and Campaigns of the Branch-Lane Brigade in the Army of Northern Virginia, 1861-1865 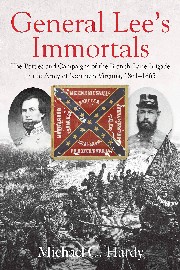 Two decades after the end of the Civil War, former Confederate officer Riddick Gatlin bewailed the lack of a history of North Carolina's Branch-Lane Brigade, within which he had served, complaining 'Who has ever written a line to tell of the sacrifices, the suffering and the ending of these more than immortal men?' Includes 88 images and 12 maps.

Comprehensive history of the unit, including that infamous day at Chancellorsville when its members mistakenly shot Stonewall Jackson. Two months later they were in Pickett's Charge at Gettysburg, and thereafter throughout the titanic battles of 1864. In the meantime we learn of the camp-life and the hard winters of Lee's army. Yet when Lee finally surrendered at Appomattox, the Branch-Lane Brigade was still with him, no longer victors but yet unbowed.