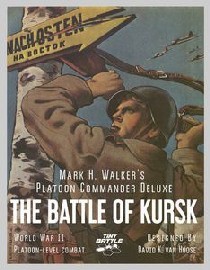 PCD:K uses version 2 of the Platoon Commander rules, which are identical to the V1.5 rules released with the latest Tiny Battle Publishing Platoon Commander game, Poland Strikes, except with enhanced artillery and new air strike routines.

At the beginning of each turn, the players determine initiative with a unique dice-off system in which ties award the initiative to whomever lacked it the previous turn and applying the Commander's Focus to the roll might tilt the odds in your favor. Next, players will draw a scenario-designated number (usually just one) of Action Cards that may be used for anything from artillery strikes, through rally assists, to negating the opponent's just-played card. Then it is time to rally disrupted units with a simple 1d6 roll against a nationality or scenario-designated morale. Action Cards, in addition to the special Aid chit, may be used to improve a unit's chances of preparing for combat.