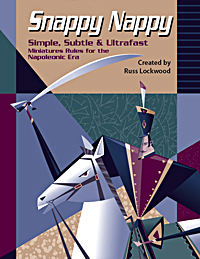 Snappy Nappy represents a bold new way to wargame Napoleonic battles and campaigns with miniatures. The simple rules can be easily understood by the rawest Marie Louisa newbie, but are subtle enough for the most experienced grognard. Snappy Nappy moves quickly, allowing an ebb and flow to the battle usually unseen with current rules.

How does Snappy Nappy play? A newbie exclaimed: "One thing I'll say. At the end of each turn, you see progress. I can't tell you how many games I've played where nothing happens."

Too true. Forget overly complicated rules that make your eyes glaze over. Forget shoulder-to-shoulder battalions moving only a foot or two on a tabletop. Snappy Nappy revels in the big battles with big movement.

One of the first customers noted: "First impressions are that the rules are well written and in an easy to understand format, I didn't need a lot of flipping back and forth to understand them. Simple as advertised, but I think the subtle may be there as well...What intrigues me most is the scope of the games, these are not grand tactical, I would describe them as operational."

And if you ever wanted to share your enthusiasm for the Napoleonic era with the younger generation, Snappy Nappy is it. Simple to start, quick to learn, and with an emphasis on maneuver -- battles unfold with noticeable speed. Snappy Nappy teaches the differences among the three arms (infantry, cavalry, and artillery) while offering command perspectives on flanks, mass, and reserves.

Napoleon said: "Read and meditate on history...read and meditate on the campaigns of the Great Captains...This is the only way to learn the art of war." We'd add a corollary about using miniatures to "see" the art of war unfold. But don't be stuck with old rules -- Snappy Nappy brings miniatures meditation into the 21st century with a bold look, a memorable name, and a bolder set of rules.

Napoleon continues to fascinate students of military history, not only because of his accomplishments, but also his failures. The same ambition that drove an unknown Corsican youth to crown himself Emperor of Europe also forced his ultimate decline and fall. Name the battle most associated with Napoleon and you'll find it to be Waterloo--hardly a ringing endorsement of his genius, and yet, it is his genius that remains with us and makes Napoleon one of those Great Captains of war.

But reading about Napoleon only goes so far. At some point, we need to take the two-dimensional lessons of ink on paper--or perhaps electrons on screen--and make them three-dimensional opportunities for meditation. We want to experience the art of Napoleonic command, perhaps as Napoleon, one of his marshals, or even as one of his opponents, and match wits across a battlefield to see if we are as good as our historical commander de jure...or perhaps even better.

Snappy Nappy is a set of historical miniatures rules for Napoleonic battles and campaigns. It is designed to combine the flavor of the period, the art of generalship, and simple -- yet subtle -- rules to create an enjoyable and playable recreation of operational Napoleonic warfare. I hesitate to call it "introductory," but if you read military history, you will be able to grasp the essence of the rules in the first 15 minutes (as over a dozen years of playtesting experience has shown us)...because we want you to be a commander, not a calculator.

Created initially in 1994, Snappy Nappy arose from Napoleon's suggestion of reading about the campaigns of history--specifically Napoleon's campaigns--which talked about maneuvers across distances, feints and probes, finding and pinning the enemy, calling in more forces to pressure the flanks, then forcing a decision point and pursuing with élan. Most Napoleonic miniatures rules concentrated on the tactical level. The grand sweeps so often mentioned in books were limited to shoulder to shoulder formations of battalions inching across the terrain.

And that's just fine if you're in the mood for such company- and battalion-level situations. But Napoleon and his marshals didn't fiddle with a company of skirmishers. They moved armies and corps (and sometimes divisions and the occasional brigade) from town to town, seizing--and sometimes missing--opportunities. That's what the memoirs and histories tell us. That's what the arrows on the maps show us. And that's what Snappy Nappy allows you to do on a tabletop.

Snappy Nappy lets you run huge battles in a short amount of time. Indeed, campaigns can be run in an afternoon. It provides a command and control structure that allows you to vary the commander-in-chief's orders without rampant disregard for his intention. It offers a simple combat system that concentrates on morale loss rather than "figure removal" for speedier play--as well as simulating those events that cause utter panic to dissolve units into oblivion as well as the occasional superhuman fortitude. It rewards coordinated use of the three combat arms as well as punishes irresponsible deployment and attacks.

So if you want to spend more time being a commander instead of a spreadsheet, Snappy Nappy is for you. If you are brand new to miniatures wargaming, you'll appreciate the ease at understanding the interaction of the "4Ms": movement, musketry, melee, and morale. If you're already a tabletop veteran, you'll enjoy the subtle elegance of its mechanics as you think more about historical accounts than flipping through charts and rules.

Snappy Nappy. The name says it all: it's a snap to learn and will make your simulation of Napoleonic warfare fast, furious, and fun.