Welcome to On Military Matters: Warfare in the Age of Napoleon Rules Overview and Introduction
OMM Home Page

Warfare in the
Age of Napoleon 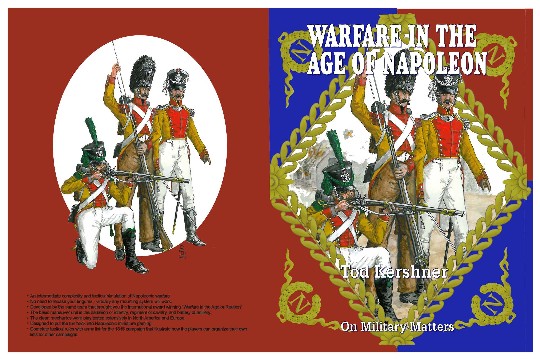 Purchase Warfare in the  Age of Napoleon Add to Cart

Naming an entire era after one man is rare, but Napoleon is such a man. The Age of Napoleon conjures up battlefield victories and defeats, colorful uniforms of massed armies, and changes in tactical doctrine.

Warfare in the Age of Napoleon captures the allure of tactical battles with fun and playable miniature rules designed by Tod Kershner, author of the award-winning and best-selling Warfare in the Age of Reason. At a scale of 1 figure equals 30 men, the typical infantry maneuvering unit is the battalion. There's no need to rebase figures, shooting is with 6-sided dice, and the Quick Play Guides/Charts move players through the turn sequence.

From the original artwork on the front over to the scenarios at the end, Warfare in the Age of Napoleon sparkles with crisp layout and informative diagrams. The table of contents details the location of any rule, and if there is still a question in players' minds, they can go on the internet to the Warfare in the Age of Napoleon Yahoo group for additional information.

These rules are meant to be fun, playable, give believable results and reward historical tactics in that order. They are also designed to be used with virtually any mounting system so gamers who already have mounted figures will not have to rebase (they may want to add some single based skirmishers though). The game is meant to be tactical with the battalion as the basic unit. Command control is simple but effective. The firing, morale and melee system are similar and once a player goes through them a couple of times they will be fully mastered.

It is rare that a historical figure is so overwhelming that his name is applied to the entire period. Alexander was such a man, as was Arthur (if indeed he existed). But the late 18th and early 19th century will always be known as the Napoleonic era because the man himself was such a history making machine that his personage dwarfs, rightly or wrongly, all other contemporary leaders (even his eventual conqueror, Arthur Wellsely). Napoleon's epoch is one of the most popular periods for wargamers because of the man, the uniforms, the formations and tactics and the list of his battles that molded the rest of the 19th century. It is hoped that some of the passionate emotion that were engendered by those immense struggles will find their way into the hearts of those who play this game. Enjoy.

More Warfare in the Age of Napoleon

WARFARE IN THE AGE OF NAPOLEON


Purchase Warfare in the  Age of Napoleon Add to Cart